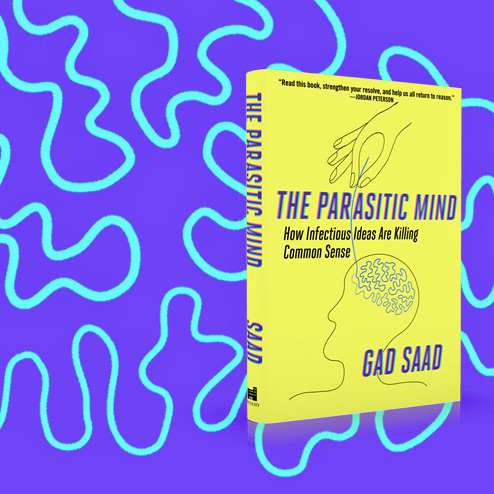 The Parasitic Mind: How Infectious Ideas Are Killing Common Sense

"Unlike other pandemics where biological pathogens are to blame, the current culprit is a collection of bad ideas, spawned on university campuses, that chip away at our edifices of reason, freedom, and individual dignity. This book identifies these idea pathogens, discusses their spread from the universities to all walks of life including politics, business, and popular culture, and offers ways to inoculate ourselves from their devastating effects." - Gad Saad.

Gad Saad is a Lebanese-Canadian evolutionary psychologist and professor at Concordia University who applies evolutionary psychology to marketing and consumer behavior fields. He has dedicated much of his life to studying how evolutionary psychology affects modern marketing strategies to better understand people's motivation factors. In other words, understanding the science behind decision making. Saad is a parasitologist of the human mind who seeks to pull people out of the class of destructive ideas that destroy our capacity to reason. He believes that we may have fallen into an abyss of "infinite lunacy", but that it is not too late to grab hold of the rope of reason and hoist ourselves back into the warm light of logic, science, and common sense.

Saad's most recent work, "The Parasitic Mind: How Infectious Ideas Are Killing Common Sense", is a provocative guide to defending reason and individual freedom but is also a battle cry for the preservation of our fundamental rights. He articulates that the west's commitment to freedom, reason, and true liberalism has never been more seriously threatened than they are today by the stifling forces of political correctness. He effectively exposes what he calls "idea pathogens" and how they are killing necessary activities of common sense and rational debate.

"Incubated in our universities and spread through the tyranny of political correctness, these ideas are endangering our most basic freedoms, including freedom of thought and speech."

I just recently finished reading this book, cover to cover, and it was an academic explosion. Saad didn't hold back much. He also didn't belittle the reader by avoiding big words or scientific jargon. He spoke to the reader as if we are just as intellectually capable of digesting heavy topics as he is. He analyzes a wide array of melancholy psychological concepts for a living. Or what some may call "controversial" or "sensitive" topics. So, if you're looking for a pick-me-up read, this isn't it. On the contrary, if you're in the mood to expand your mind and push it to its limits, this will fit the bill.

I really resonated with Saad's ability to hop from one example to another. Although he showed some amount of proper emotional appeal, it was not overpowering. Throughout all chapters, he focused on the task at hand, which was to expose, and most importantly, back up the claims of idea pathogens that now "wreak havoc" on America and the world. And he did it with grace and class. I share two characteristics with Saad: 1. love for freedom and truth & 2. practicing skepticism. Both of these qualities can be beautiful when appropriately managed, and I believe that all things, including philosophical concepts, are to be moderated.

Overall, I learned so much from reading through Dr. Saad's enlightening examples from his own experiences, colleagues' experiences, and the incredible amount of scientific research he has put in over several decades throughout his career. If you are interested in giving the book a shot, I would recommend going into it with a completely open mind. To put it lightly, Saad does not sugar-coat a single thing. There are dozens of seemingly controversial arguments that he addresses while refraining from "political correctness". He comes from a place of presenting factual evidence obtained through research methods and then supports his claims with more personable exemplifications. Dr. Saad's goal is to guide the reader towards perceiving tough topics through a different lens, and I believe he succeeds at it.

Some more quotes that caught my attention: