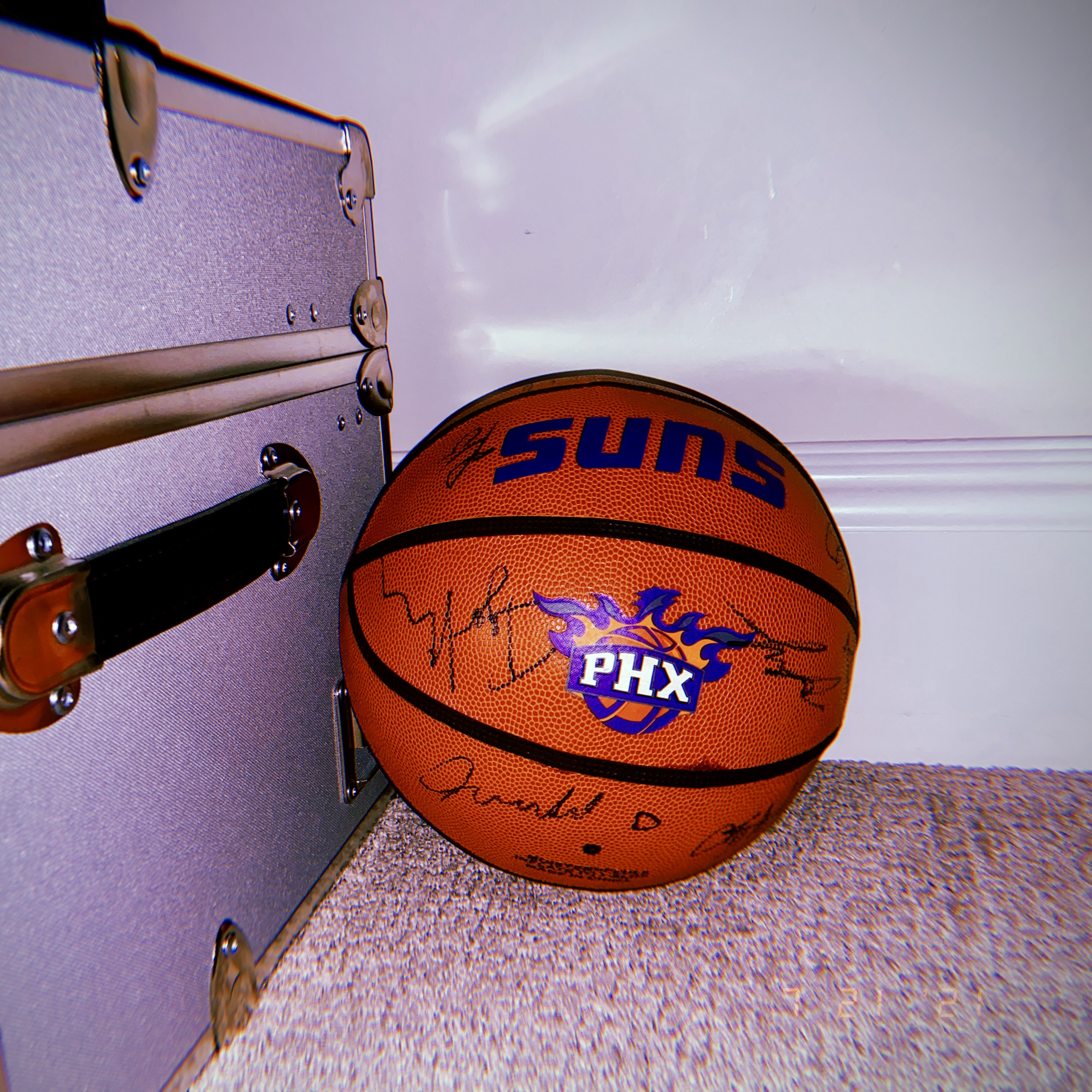 I’ve never been particularly interested in watching sports, specifically, on television. I had never understood the whole concept of revolving one’s day around ensuring that they’re plopped on the couch at a definitive point in time in order to stare at other humans moving around the screen in contentious ways. My parents always healthily encouraged my brother and I to play sports, so we did throughout all of childhood until college. Although competing came with some low points, in retrospect, I am so grateful for the emotional and physical development that competition provided me. I know that playing a professional sport is a whole other level of commitment, physical labor, and mental fortitude; however, I believe that the exposure I had during my athletic years gave me some sort of elementary glimpse.

I played competitive tennis, and my dad also got me into golf at a very young age, so I’ve always considered those two to be enjoyable pastimes. Naturally, since I was more hands-on with them, I knew the professional players in tennis and golf as well. I grew up watching all of the grand slams, major tournaments, and even attended a few tournaments around the US. Besides, the experience of attending an event and watching the sport being played in person is a whole different ball game; hah, see what I did there? Aside from tennis and golf, I was never really noticeably engrossed in other sports leagues such as football, basketball, baseball, etc. And, as many would agree, watching the Olympics doesn’t count. One could say, “oh, that’s the same viewpoint as most teenage girls.” That may have been a factor, but I’ve now put a little more thought into it.

Things changed in the past few months as one particular sports team started to attract the eyes, and indeed the hearts, of nearly all Arizona dwellers this summer, including myself. That team has been the Phoenix Suns. After witnessing a rollercoaster of wins and losses, seeing the valley light up with excitement over finally having a talented team to be proud of, and being able to connect with friends, family, and even strangers over the Suns, I feel like I finally understand true sports fandom.

It’s no secret that Arizona isn’t known for having good sports teams. We have never been, but that doesn’t mean we couldn’t be known for it in the future. Right now, the Phoenix Suns are the only light at the end of the tunnel for post-pandemic Arizona sports, and the team’s success this past season has been a delightfully joyous element of culture for Arizonans to bond over. The most recent national championship win, across all sports, that an AZ team brought home was the Diamondbacks defeating the New York Yankees all the way back in 2001. In that year, I was only a wee 2 years old. Thus, I have zero recollection of that win. I thought to myself recently that prior to the Suns’ burst of success this year, I had never really experienced the feeling of being wholeheartedly proud of an Arizona team before. Granted, there were certainly Cardinals’ game wins, and Coyotes’ wins, and DBack wins in recent years; however, they never captivated my interest that much.

Well, to fast-forward, the Suns’ journey all the way to the 2021 NBA Finals was, I thought, truly so thrilling. Our current Suns roster is the perfect balance of young, energetic, wise, and exceptionally talented. We’ve got guys who date supermodels, down-to-earth dads, and everything in between. And something the players have constantly been repeating is how they are passionate about cultivating a team that is here to stay for a while. In other words, I don’t think our starting lineup will be moving to other teams anytime soon. But, then again, I’m not a sports know-it-all. A few nights ago, we all watched game 6 of the NBA Finals, and unfortunately, the Suns’ weren’t able to pull out the big W, but that’s okay! I hope it sparks a flame of motivation in them to get back to the same position next year and finish what they started.

See, the fact that I’m even writing this entry with this much team spirit is somewhat scaring me, not gonna lie, but I’m going to embrace it. Recognizing the newfound devotion within myself has propelled me to analyze it a little bit, and I’ve made a few conclusions. Bare with me as I attempt to compare the concept of professional sports to an undeniably singular and beyond-my-understanding example of another physical pursuit. Similarities between war and sports are apparent and have been noted for many centuries. One item of overlap is simply their corresponding vernacular. The vocabularies of war and sports often coincide: offense, defense, aggression, leadership, strengths, weaknesses, victory, and defeat. In addition, just how there are rules in sports, many wars have been fought according to prior terms agreements as well.

Something peculiar within us draws us to either want to partake in combat or become an intrigued spectator of such combat. Since I’m no psychologist, I have no clue what the scientific reasoning in the human brain is that explains this phenomenon. But clearly, the inkling is still around and has never left the human race a single time throughout all of our history thus far. Now, for a more pop-culture-related and somewhat girly reference that I believe somewhat coincides with this topic. I’d like to quote the legendary Britney Spears: “There’s only two types of people in the world: the ones that entertain, and the ones that observe.”

Currently, society views sporting events and game-playing as a means of entertainment, physical exercise, and even relaxation. But in reality, the concept of sport has become the primary substitute for war in societies that seemingly thrive on the need to continually engage in conflict. So maybe that’s it, it’s not necessarily a collective psychological desire to engage in physical combat, but instead, our individual desires to create and experience conflict. There are extreme lows and extreme highs with conflict, a dichotomy that is exemplified in competitive sports in an alike manner. I’m sure there are a million written excerpts out there discussing this exact same topic. But for me, sometimes I have to come to realizations on my own in order for them to hit me with pertinent significance.

When the COVID-19 pandemic hit and all professional sporting events were canceled, there were many leagues, fans, occasional viewers, and players who were probably severely bummed in various ways. It definitely took a bulk of time for sports associations to figure out how to best recommence games appropriately once we had more of a grasp on the virus and its transmission nature. Around this time, I was severely disinterested in mostly all sports, even before the pandemic, because I was in college and interested in other outlets that I utilized for personal entertainment. On occasion, I’d get updates regarding national championships from social media, watch a few games with my dad while back at home, and try to stay caught up with any famous athlete drama; but that was pretty much it for a while. Clearly, my relationship with sports has shifted a good amount recently, and I owe it all to the Phoenix Suns.

I just thought of another question on a whim, then I promise I’ll get back to the point. Has anyone stopped to consider the irony that the most chaotic weeks of violence and rioting that occurred last year happened to be precisely during the time when sports games were completely canceled indefinitely? And that, because of the pandemic lockdowns, plunging of entertainment outlets, and the eliminated option of watching our favorite sports may have instilled more of a subconscious longing for conflict that ended up needing to be expressed? It’s kind of a weird coincidence. But, I don’t know; those questions are just food for thought.

Many people are just as passionate about their sports teams as they are about politics or religion. Maintaining emotional investment in a specific team and cheering them on has become a part of everyday life. As adults, we retain fond memories of enjoying games with friends and family and care about that emotional feeling continuing. To continue, the team has to keep winning and keep creating marvelous spectacles for us to witness. Families establish traditions around sports, similar to their religious practice or extracurricular endeavors. And, most of all, sports are one of the leading ways in which people amongst a community can connect with each other over a shared interest.

This aspect of modern-day sports is a reality I’ve grown to genuinely appreciate and have sentiment towards. The reinvented Suns have now unlocked a brand new dimension in my mentality towards sports as a whole, and I am so excited to keep following their future successes. I can finally consider myself a fan, a title that I never really understood the emphatic meaning of until this past year. You won’t catch me painting myself orange or wearing any neon wigs at every game, but I’ll continue showing my support on the inside.