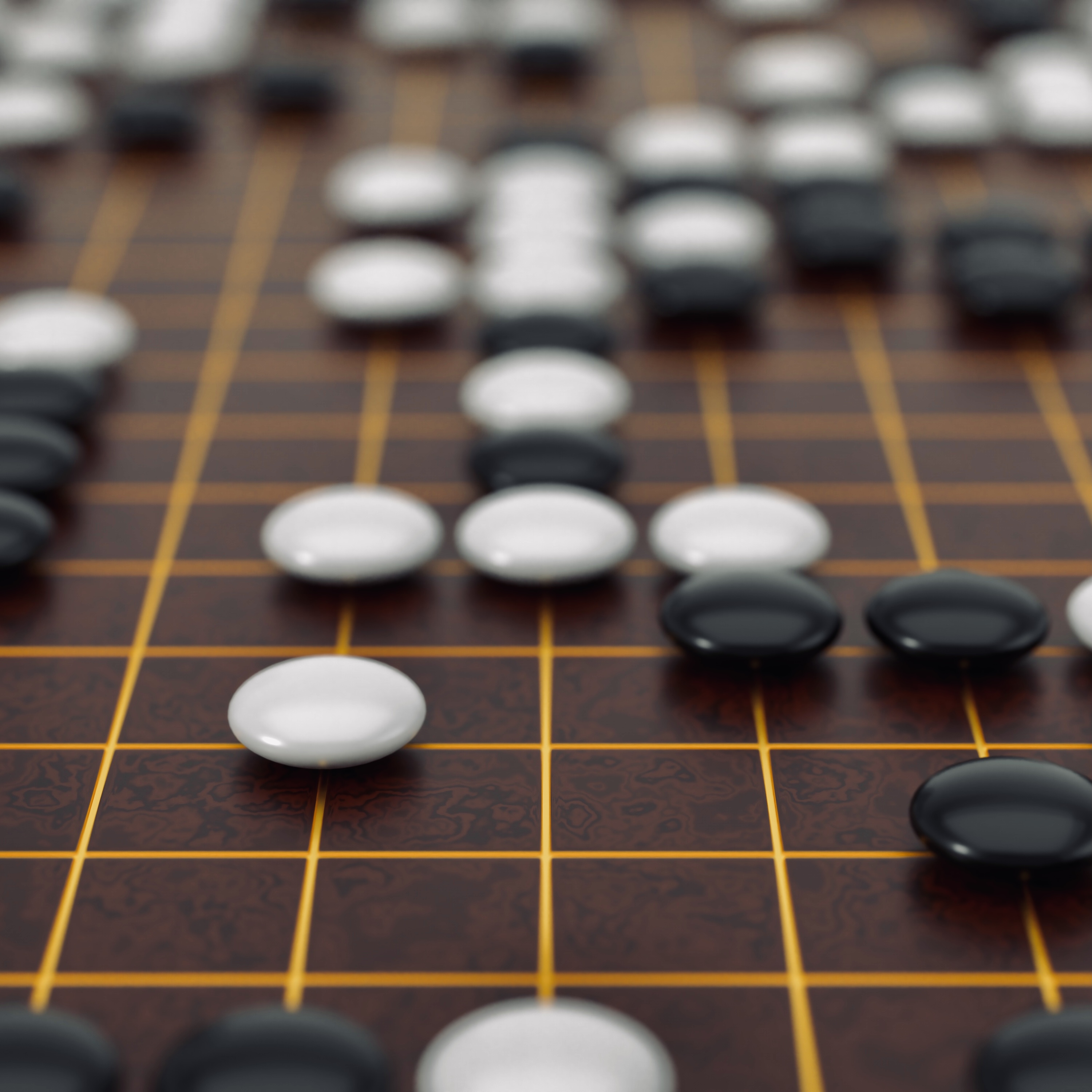 The ancient game of Go is probably the most complex game ever devised by man. Invented in China, more than 3,000 years ago, it is believed to be the oldest board game continuously played to the present day. It has 10^170 possible board configurations, which is more than the number of atoms in the universe. For those familiar with Chess, Go itself is more straightforward, yet more complicated. Simpler because all of the pieces are the same, just black and white, and in Go, the pieces do not move around the board. The playing pieces are called “stones”. One player uses white ones and the other, black. Players take turns placing their stones on vacant intersections or “points” of the board. Once placed, stones may not be shifted but can be removed from the board if the stone is surrounded and “captured” by the opponent. And when a game concludes, the winner is determined by counting each player’s surrounding territory along with their amount of captured stones. Overall, Go reigns as king of all strategy games due to its mind-boggling number of possible board sequences, complexity, and millions of experts who play the game worldwide.

Artificial intelligence has become a household reference. Most people are familiar with A.I. technology and what it is capable of. Given that it’s only been around for a little over 50 years, conversations about A.I. are undeniably common amongst the workforce, businesses, scientists, and especially engineers. We can track the evolution of A.I. by analyzing unique products and technologies that became prominent throughout recent decades. The chart below indicates a series of remarkable releases that have shaped A.I. into what it is today.

If you pay close attention, you can observe the most recent revolution in A.I. development is AlphaGo. Released in 2017, AlphaGo is a computer program created by DeepMind Technologies that plays the board game, Go. Before 2017, DeepMind Technologies was a startup artificial intelligence company and research laboratory based in the U.K. Now; the company is a wholly-owned subsidiary of Alphabet Inc., otherwise known as Google. What put them on the map was the AlphaGo computer program that learned how to play Go and became better than any human alive. Also, not only was it able to defeat a professional human Go player, but it was the first to defeat a Go world champion and is arguably the strongest Go player in history.

According to DeepMind, Go is a googol times more complex than chess, which certifies it as being the most challenging board game to program into a computer. A.I. engineers had already solved chess; therefore, it was time to test if Go was possible. So they created AlphaGo, which combined advanced search trees with deep neural networks. Their neural networks take a description of the Go board as an input and process it through a number of different network layers containing millions of neuron-like connections. One neural network, the “policy network”, selects the next move to play. The other neural network, the “value network”, predicts the winner of the game.

DeepMind first introduced AlphaGo to numerous amateur gamers to help it develop an understanding of reasonable human play. Then, they had it play against different versions of itself thousands of times, each time learning from its mistakes. This is the definition of artificial intelligence: the theory and development of computer systems that are able to perform tasks that typically require human intelligence, such as visual perception, speech recognition, decision-making, and translation between languages. There are also four types of artificial intelligence: reactive machines, limited memory, the theory of mind, and self-awareness. In regards to AlphaGo, the program possesses all four characteristics.

Artificial intelligence programming allows machines to use previous experience to learn. Getting a machine to learn on its own is an advanced strong A.I. capability. The original AlphaGo demonstrated superhuman Go-playing ability but needed the expertise of human players to get there. It was the combination of both stages that allowed AlphaGo to play at such a high level. This ability to replicate intuitive pattern recognition is nothing short of a BIG deal. DeepMind and Alphabet documented their progress of developing AlphaGo in an incredible documentary titled: AlphaGo.

A journey from Cambridge's halls to Seoul, where a legendary Go master faced the unproven A.I. challenger, the film highlighted an immense amount of insider knowledge on present-day artificial intelligence companies, programmers, and what the future may hold. It turns the A.I.-powered AlphaGo into an emotional journey. Simultaneously, it juxtaposes the deep love that players hold for the sport with DeepMind's engineering team's passion for breaking the next frontier in technology. I watched the whole thing and learned so much; you should check it out too. It's worth it!