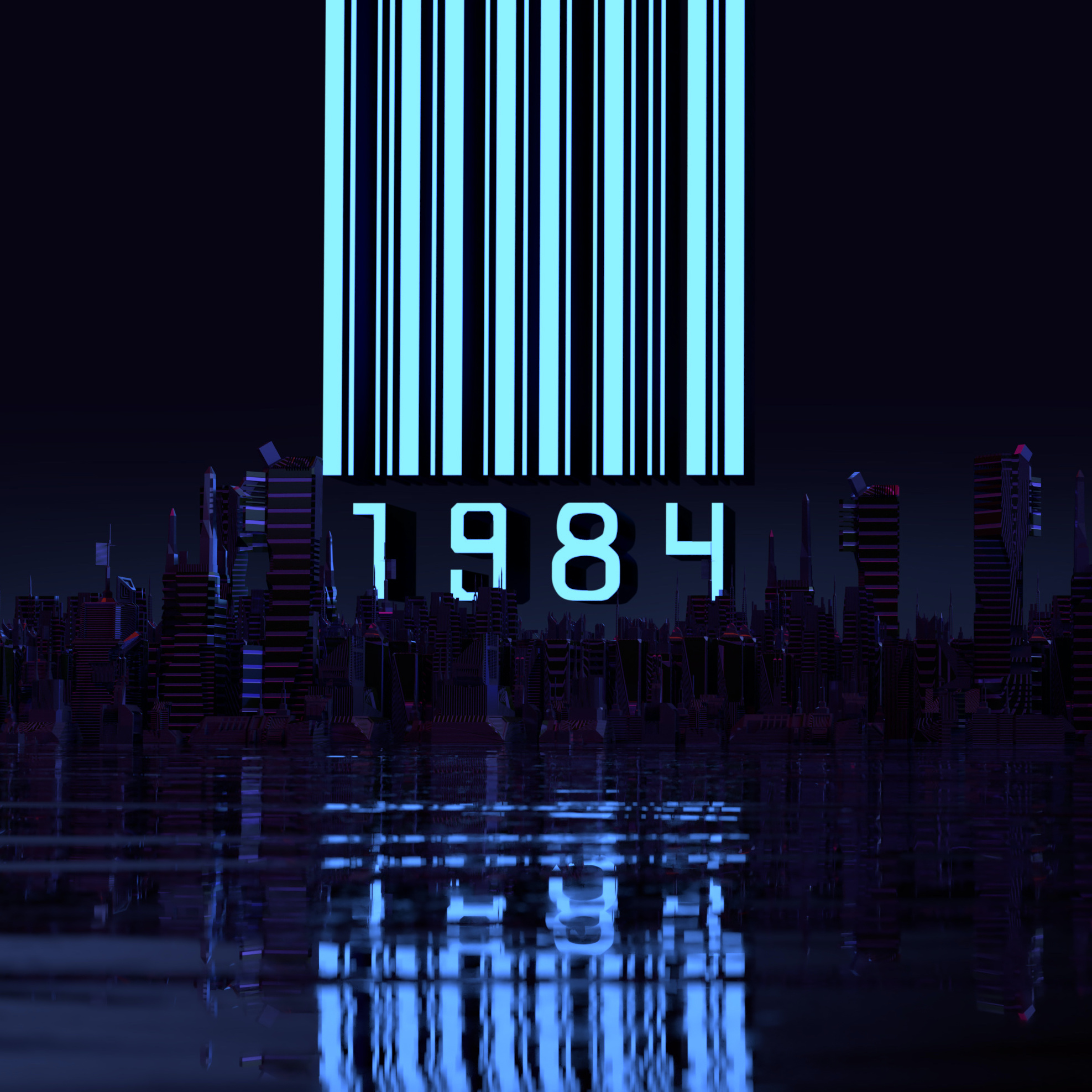 Airstrip One, the fictionalized version of London, in George Orwell's provoking novel - 1984, is staggeringly similar to the America we know in 2020. It is inarguable that this year is one of the most unique, appalling, and critical periods of time that anyone alive has ever experienced. Due to many reasons, and a significant contributor being the COVID-19 pandemic, societies have faced momentous loss, hardship, and consequence. However, that is not all. 2020 America has come to many profound realizations of critical societal issues, holes in the technology system, social constructs, and law & order across the board. All of which fall under gargantuan sectors of how a first-world country functions.

In Orwell's presentation of Airstrip One, the story's primary setting, the city is divided into three distinct social groups. The Inner Party lives in relative comfort with servants and access to luxury goods. The Outer Party, of which the main character, Winston, lives in stark, dilapidated conditions with very little control over their personal space or property. And the lowest social group, the proles, live in poorly maintained slums where the Party does not attempt to exert much control and does not provide support or opportunity. Although a precise distinction such as this is not present in 2020 America, the same groups are still apparent. Like the main pillars of structure that we emphasize today, Airstrip One is dominated by four large mega-structures representing the four ministries. An interesting twist that Orwell included in the story is that each of these departments is intentionally misleading and the exact opposite of each office's function. The Ministry of Love is in charge of law and punishment, the Ministry of Peach controls war, the Ministry of Plenty manages rations, and the Ministry of Truth produces propaganda.

As I began keenly reading this book, I thought to myself, why hadn't I been instructed to read this in grade-school? Why is it so stigmatized? Why has Orwell continued to receive so much conflicting backlash regarding the themes, opinions, and fictional material he brought to attention? So, I started researching. It seems that many people are threatened by the multi-dimensional storyline present in 1984. Whether it be for political reasons, mental health reasons, or fear-of-the-future reasons, many Americans have advocated for this book to be banned. Is that really necessary? A quote that I admire from one of the greatest psychologists alive today, Jordan Peterson, is: "The way that you make people resilient is by voluntarily exposing them to things that they are afraid of and that make them uncomfortable."

We live in a world of unprecedented ease and comfort. And 2020 threw this consistency all out of whack, which is why it's been so tough for many. In the western world, we no longer have to face the elements, contend with hunger, physically fight against animals or other humans as resources, or hike for miles to find clean water. Everything we need, and most things we want, are available with the click of a button or the flick of a switch. And it's made us weak, in a way. I believe that these luxuries made us perceive the pandemic in a much more troublesome light than perhaps people would have in the nature of previous decades.

When George Orwell published 1984, he was nearing the end of his life in 1949. Due to this, the technology of 1984 is mostly unchanged from the mid-twentieth century period when Orwell wrote the novel. Trucks, submachine guns, airplanes, and leg irons all seemed identical to the real-world counterparts during his time. In other words, although he was writing a "futuristic" novel, the technology portrayed in 1984 was not as far out as, let's say, time travel or something. Most famously, the setting of Airstrip One includes the "telescreen", which functions as a two-way television, showing governmental members a constant stream of propaganda while simultaneously providing the Thought Police a way to watch every individual in the city. Telescreens represent, both symbolically and literally, the all-seeing eye of Big Brother and are synonymous with the quote "Big Brother is watching you".

This segways into a topic that I feel is monumental, in regards to America in 2020. The ideas of Big Brother, telescreens, the Thought Police, Newspeak, and two-way televisions, were presented by Orwell in 1984 in a fictional and satirical manner. Well, today, it isn't fictional nor satirical anymore. These concepts live among us all. Individuals who advocate for this story to be destroyed and who protest for our children not to read it in schools are the people who will most-likely disagree that these same themes are exhibited in America. To them, I have a few counter-points to address.

Airstrip One is an indisputable dystopia. Orwell depicts it as "miserable and run-down" with "decaying suburbs" and "nearing a revolution", a totalitarian and highly formalized state, the city has no law, only crimes, and nothing is illegal. Social pressure is used to exert control in law, and it is hard for the citizens to know when they are in breach of Party expectations. They are virtually in a state of permanent anxiety, unable to think too deeply on any subject whatsoever to avoid "thoughtcrime". Not only were they physically restricted as to what actions they could or could not do. But their minds were limited as well, as to what they could or could not think.

Thinking is one of the most instinctual, inherent, and authentic aspects of human existence. Imagine if that were a qualification to receive punishment? Long-story-short, these added-on examples help to explain the setting of Airstrip One and Orwell's presentation of a clear "dystopia". I reference this to induce a thought-provoking response from the audience. I believe Orwell had the same goal in mind when writing the story as well.

Before 2020, technology had progressed a hundredfold. And it continues to do so every second. I often come across people who say, "why does it matter that my information is out there online?", or they'll say, "I have nothing to hide." And now that there's been an increase in social media applications managed by companies in other countries, a whole new set of potential issues has entered the equation. For example, Tik Tok. Wouldn't it be nice if everyone simply "had nothing to hide"? Wouldn't it be grand if everyone had the kindest of intentions? Wouldn't a world with only "good people" make digital communication just perfect? Well, it's not that simple. I don't think that there would EVER be a moment in time where those criteria would all be filled.

Personally, I admire people who tend to look at technology and only gravitate towards the benefits that it provides. In fact, I'm one of those people. I used to say things like that and have zero care for the repercussions of the information I put out there. But, now, after digging a little deeper, I've been able to understand how valuable one's privacy is, and how having full control over your digital persona is a necessity.

The portrayal of mass surveillance in Orwell's 1984 is very different from what we have in America in 2020; however, the concept remains the same. The surveillance conducted in Airstrip One was carried out by Big Brother, the central governmental system. So, it was all filtered by one group of people and a sole infrastructure. Right now, across the globe, there are dozens of Big Tech companies that perform the same activities as shown in Airstrip One. But, instead of one entity running the show, it's a multitude. Does this scare you? You might still be thinking, "okay, then what's the problem"? I could write pages and pages about this, but Big Tech isn't chasing financial success to keep it concise. They are endlessly chasing more and more data.

According to a recent documentary, "The Social Dilemma", ex-employees from companies like Google, Facebook, and Twitter explained how the goal shifted from monetary success to intel success very quickly. "If it's data, there's a good chance that Google is collecting it". And data can be anything. "Google collects your IP address, crash reports, time, interactions between apps, browser history, name, phone numbers, payment information, photos, documents, emails, comments on YouTube, and anything you write online." This is how they formulate our "digital personas". And they've gotten really damn good at it.

These companies, and how they filter such massive amounts of data, can be compared to the governing system in Airstrip One. Censorship, cancel culture, political correctness, and guideline compliance are all efforts that can be correlated to the concepts of "thought crime" and "newspeak" in 1984. The main political issues relevant to America in 2020, such as law & order, social justice, gaps in technology, and healthcare conflicts, also mirror the four central ministries described in the story. America has a lot of rebuilding to do. The COVID-19 pandemic, for all of its many tragedies, did bring one enormous positive to fruition: issues that we need to fix are now highlighted, and we know what should be prioritized. Part 2 of this is coming soon... There's a lot to cover.